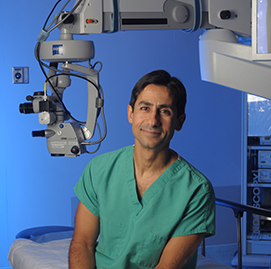 Andrew Aziz, M.D. has practiced ophthalmology in a wide range of settings since July 1997 and has extensive experience in the latest techniques of cataract surgery, corneal and refractive surgery, laser surgery, treatment of glaucoma, macular degeneration, diabetic eye disease, and general ophthalmology. He is an honors graduate of the Wright State University School of Medicine, where he received the award for both Excellence in Ophthalmic Research and the Academic Excellence Award. He completed his residency in Ophthalmology at the University of Cincinnati Hospital, where he served as Chief Resident. He went on to perform a postgraduate fellowship under Daniel S. Durrie, M.D., one of the most respected ophthalmologists in the country.

Dr. Aziz is coauthor of two textbook chapters on refractive surgery and has over 20 publications and presentations on a wide range of subjects including: infectious eye disease, refractive surgery, retinal disease, ocular emergencies, and genetic eye disease. He has lectured to ophthalmologists nationwide. While practicing in Milwaukee, he served as team ophthalmologist for the Milwaukee Brewers of Major League Baseball.

Since 2008, Dr. Aziz has been voted by his peers to the list of the “Best Doctors in America,” representing the top 5% of physicians in the country. Additionally, he has been included in Orlando Magazine’s list of “Best Doctors” for multiple consecutive years, and was featured on the magazine cover in 2010.